Just over a year ago Saachi passed away of hemangiosarcoma (blood cancer in dogs). It happened so quickly. I woke up one morning and Saachi was hyper ventilating. A 14 centimeter splenic tumor was pushing up against her lungs. She stayed in emergency until the splenectomy at which point (three full days later) the tumor grew to 20 centimeters.

We found out a week later the tumor was malignant. There were various options for treatment but it was more to make her last few (read: weeks) as comfortable as possible… 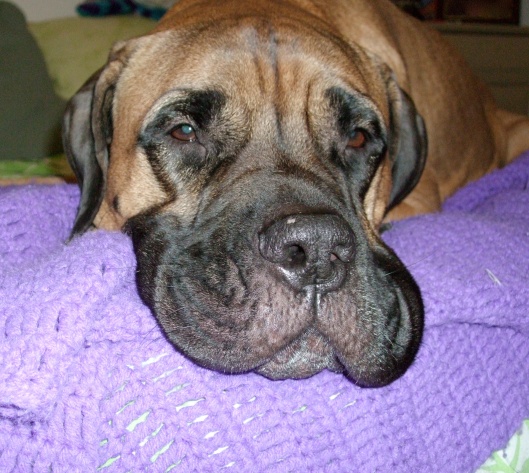 Saachi was an interesting dog. Well first, I should mention she was a giant. She was a Bullmastiff but one of the most beautiful mastiffs I ever saw. Her muzzle was not squat like most of her breed. It was long and well proportioned to the rest of her face.

She was highly aggressive. In her early years she was both dog and human aggressive but as she got older she mellowed out. She was very much my father’s dog. In comparison to how much she loved my dad she disliked me because I was the disciplinarian and in her eyes I did not spoil her the way my dad did.

I used to climb over the stair railing because she’d sit on the corner stair and nip at my ankles any time I went up or down. 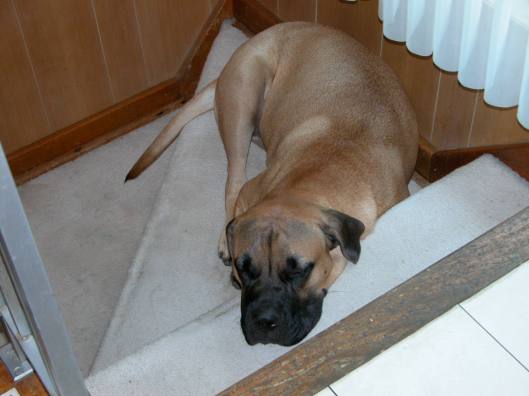 Regardless, she was highly protective of me. Dad traveled a lot for work so Saachi thought she needed to shelter me from the big bad world. 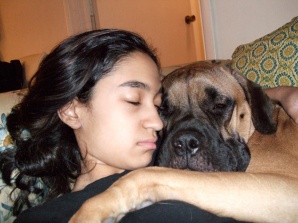 When I went away to college I joked to my dad “wouldn’t it be funny if the saying ‘distance makes the heart grow fonder’ is actually true and when I come home for break Saachi will be my best friend?” He just replied,  ‘I wouldn’t count on it, she really doesn’t like you!’.

Well, guess what? I came home and she was my best friend! Since my first visit home she realized she actually loved me.

And, as the years by, we became even closer. When she was ill or scared she’d come to me and she knew I was the one with the food. She was always my father’s dog but he traveled a lot for work so I was the pack leader, the one who provided and cared for her. 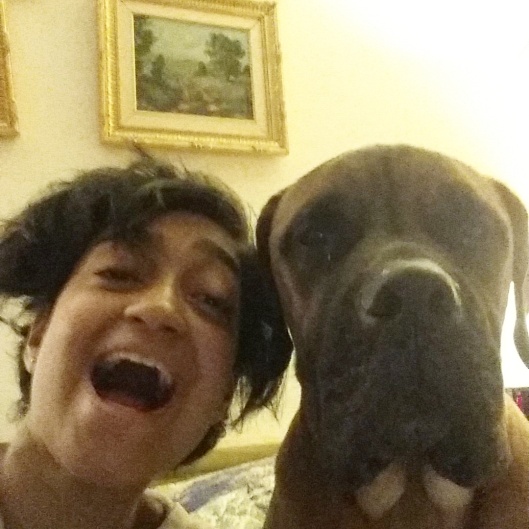 She stayed with me when I was flared up or ill. She needed less attention when I couldn’t give it. She was understanding and caring.

When she became ill something shifted. Saachi was a sexist dog. Dad was her favorite so she always preferred men over women. But, when she got sick and saw me more as her master she started snarling and barking at men! She never used to do this and I thought it was hilarious. She was always protective of me but not at random people on the street. 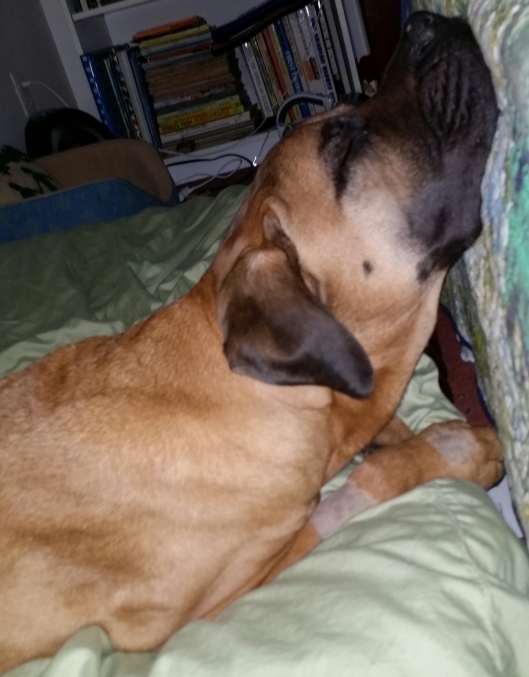 Saachi was an extraordinarily loving dog. She may have been a little crazy, unsocial and aggressive but she knew who her pack was (Dad, me, Marmalade, Sunsilk and Affie) and never wavered from that. Poor thing, though, she really loved the cats but they bullied her because she was the baby of the family. Of course, she’d get back at them by cornering them or sticking her big fat face in theirs.

I never realized how lively the house was while she was alive. She was the vivacious one. Now, on multiple occasions, I exclaim at how “boring” Affie, Marmalade and Sunsilk are. All they do is sleep. They don’t like playing with me and really just do what they want to do. They could have 8 hour a day jobs and I would never know.

Saachi was the polar opposite. She loved to play and she lived to be around people. She was spoiled and loved and always got new toys and sweaters and beds and blankets.

True story: Dad bought her Indian necklaces to wear, got ready to fly home when he realized there were three other pets in the house and quickly found jewelry for them too.

It has been over a year since Saachi passed away but we are no nearer to getting a new dog. We just don’t want another one. Saachi (all of them in fact) is so precious to us. We know we’ll never have pets like them again and while we would never want to replace them we also know others would not hold a torch to them.