When I went to the beach I played the boardwalk games. I never won anything until five or six summers ago. I do not remember the game but I won a bright neon orange monkey.

This monkey resided in Affie’s bed. Some times we played fetch but usually Affie just slept with it. I was ok with that. The otherwise trophy got some use and I was not particularly worried since Affie was very careful with her toys. 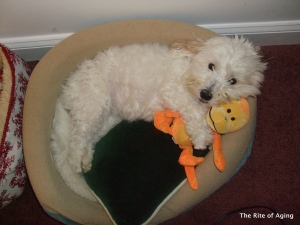 Three days ago, Saachi went on a toy search and grabbed any and every stuffed toy she could find. I did not realize she grabbed the monkey until she was up the stairs.

I tried everything to get the monkey back but because it was “new” Saachi guarded it with her life. She was very smart. She knew I could grab the toy at the front part of her mouth (when she held multiple toys) so she held the monkey at the back of her mouth.

Fine, I said, I would grab the stuffed animal later, maybe when Saachi was outside or napping.

The next day I grabbed the toy but it was too late. My big brute of a Bullmastiff tore the monkey’s head off! Of all the things she could do, she ripped its head off.

As with all toys, this one is now Saachi’s and like clockwork she has already lost interest in it.