My latest infusion kicked in and I feel less tired than usual which means more nail art!

I recently got my paws on Pipe Dream Polish’s elusive “Clearwater” polish. This is a clear polish exclusive for water-marbling so you can still see a base color through a watermarble design!

Now all I want to do is watermarble! Unfortunately, it has been so long since I did a true marble I am more than a little rusty. That’s okay, I practiced a little and am getting back into the swing of things.

Amy from the Instagram account McPolish is hosting a 31-week version of the September 31-Day Challenge. Instead of tackling daily prompts we are attempting one prompt a week. This challenge will take us well into this years #31DC2016 so I may cut out early or maybe I will overachieve and do both! ….Too bad I can’t predict or gauge how I will feel that far into the future…

#31DC2016weekly (the tag on social media accounts) started last Saturday but for the life of me I could not think of anything to do. I tried a red dotticure which looked nothing short of hideous. I attempted a skittle which fit less than five separate jigsaw puzzles. I took a step back and picked one red to base an entire look and I fell short. I realized early on that red is an uninspiring color for me! I’ve never liked how true reds look against my skin tone so in general I steer clear of the color. 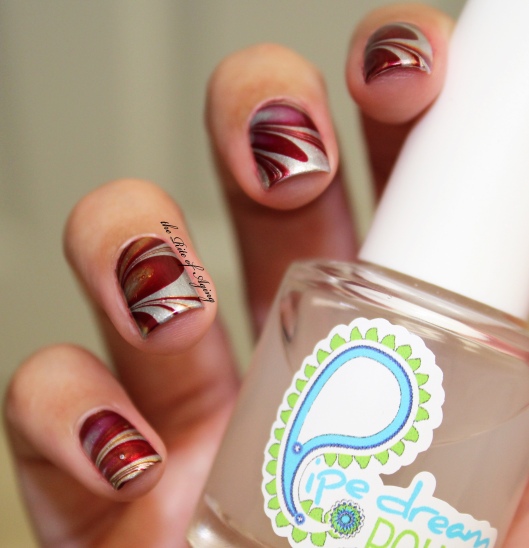 I settled on a watermarble because well, why not and I am so pleased with the final result! I practiced creating the marble a few times because the gold and red (from separate brands) did nor want to play together and refused to spread properly. Eventually, I managed a few bullseyes I could get on board with. I hope you like it!

Base: OPI “I Drive A SuperNova”

Check the sidebar for more information.

I am so behind on the 12 Days of Christmas challenge it’s not even funny. At the end of last week I felt lousy due to a potentially cracked rib and as the days crept by I realized I was not remotely inspired by ornaments or ugly Christmas sweaters (albeit, I already planned on skipping the ugly sweater prompt). I tried a couple of ornament looks and the designs I liked the most were too big for my nail so I opted out of that one as well. However, I want to go back and try the wrapping paper idea because I could go any which way with that prompt!

Anyways, back to today’s look. I sat down ready to start my candy cane stripes when I realized I was too picky to have mismatched stripes so I opted for dots!

I also managed a video tutorial for this look so I hope you like it! 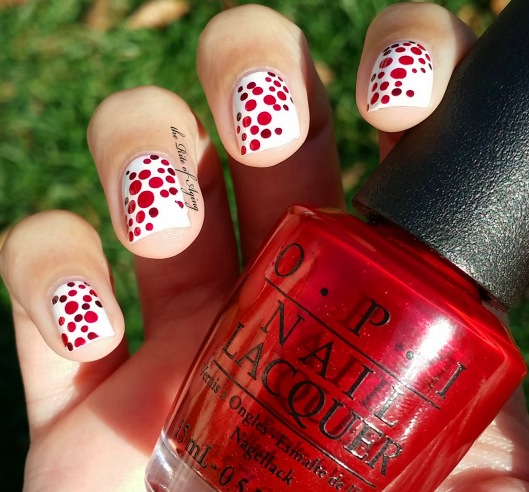